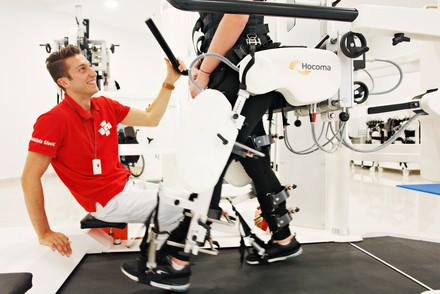 We would like to share our clinical experience with a patient with incomplete T7 paraplegia. The patient was admitted to 3 months after the injury. To walk, the patient needed two crutches. He was given an intense rehabilitation program with Lokomat and conventional therapy, and at the end of this program the patient was able to walk without crutches. The improvement we observed over the therapy progression encouraged us to share our experience to support other clinicians working with the same patient group.

Please find below our case report including a description of evaluation, intervention and therapy progression including assessment scores given.

A 65-year-old patient with no prior significant medical history presented with sharp lumbar pain and progressive weakness and numbness in his lower limbs.

He underwent operation that same day where a T6-T8 laminectomy and spinal cord decompression were performed.

He was discharged to an inpatient rehabilitation center where he stayed for 2 months. From then on, he exercised at home twice a week.

Upon admission to our clinic, 3 months after the injury, he had spastic paraparesis, level C according to the American Spinal Cord Association (ASIA) Scale:

We chose LokomatPro (Hocoma, Volketswil, Switzerland) to achieve our goals because of its therapeutic approach based on motor learning principles. The patient was also provided with interactive task-oriented training combined with neurofeedback. Such an approach increases the patient´s motivation and leads to better functional results.

How to Challenge the Patient

The patient was guided through several treatment phases by adjusting the Lokomat parameters in order to increase his active participation. 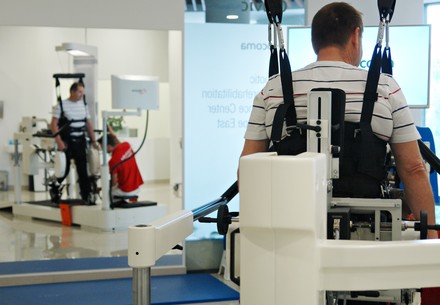 After the robotic rehabilitation program the patient was able to walk without crutches.

The findings from this case study suggest that Lokomat gait training is an effective method which facilitates motor recovery in a SCI patient 3 months after the injury.  The improvement of overground walking function presents itself as a primary outcome of a highly intensive rehabilitation program, with secondary outcomes such as the improvement in the walking speed or lower extremity muscle strength. Our program of 10 weeks, 6 sessions per week of Lokomat intervention was built based on the principle that intensity and repetition matter. We will continue to implement its highly intensive use along with conventional physical therapy to achieve the best locomotor outcomes. 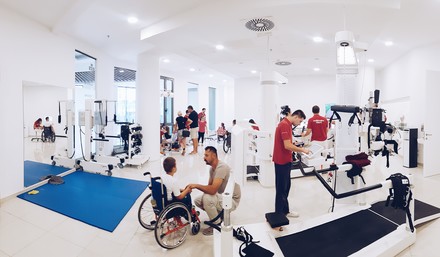 The Polyclinic Glavić has provided medical services, examinations, and diagnostic procedures in the fields of neurology, ophthalmology, physical medicine, and internal medicine for almost 30 years. Treatment and rehabilitation of neurological outpatients throughout neurological services, robotic and conventional neurorehabilitation are also offered on an individual basis in the capital of Croatia, Zagreb. Today, the services of Polyclinic Glavić, a Neurorehabilitation Center in Eastern Europe, unite the best of technology, robotics, and know-how in neurorehabilitation and neurology. By using high-quality medical services that are significantly cheaper than in Western countries, by combining comprehensive medical knowledge, advanced technology, the most sophisticated robotics devices and well-trained and educated teams, we transcend the realm of “standard” neurorehabilitation (gait-, leg-, arm-, hand-, back-, balance therapy and more) in Croatia and the region.

This clinical experience report is meant to serve as an example of how the LokomatPro integrated into a rehabilitation setting of a specific clinic. It is not necessarily a standard recommendation from Hocoma.