In the past, the Lokomat has been used as a helpful training tool to both improve movement function and prevent or reduce secondary complications such as spasticity. Dr. Kerstin Baldauf and her group from the Rehabilitation Clinic Zihlschlacht, Switzerland, were therefore very motivated to take up the challenge and test feasibility and effectiveness of Lokomat assisted training in patients suffering from hereditary spastic palsy (HSP) when contacted by two members of the Swiss and German HSP support group in January 2011.

HSP is listed as a “rare disease” as it only affects 2 to 6 in 100,000 people. The major neuropathologic feature of HSP is nerve degeneration that is maximal in the terminal portions of the pyramidal tract, the longest descending and ascending tracts in the spinal cord.

Symptoms depend on the type of HSP inherited. The main feature of the disease is progressive spasticity in the lower limbs, due to pyramidal tract dysfunction. At an early phase patients experience difficulty with balance, occasional stumble, and trip or fall while walking due to foot dragging.

If symptoms begin during the teenage years or later, spastic gait disturbance usually progresses over many years. Patients develop an un-physiological gait pattern over time, which eventually results in the need for a cane or walker. More severe cases ultimately require a wheelchair.

At present there is no cure for HSP, nor any way to reverse the disease or halt its progress.

However, HSP patients report benefits from fitness and specialized exercise programs prescribed by physiotherapists with the aim to restore and maintain the ability to move.

The main goal here is to reduce muscle tone, to maintain or improve range of motion and mobility, to increase strength and coordination and prevent further complications, such as frozen joints, contractures or bedsores.

In parallel, patients try to maintain their walking ability as long as possible by daily fitness and walking exercises, activities that become increasingly difficult as the disease progresses.

The general hope of the two patients with different HSP severity grades (moderate, ambulatory without walking aid; severe, wheelchair-bound) was:

*In contrast to many other neurologically impaired patients, HSP patients suffer from continuous high muscle tonus in their legs rather than sudden spastic reflexes which makes walk training more and more difficult over time.

The Lokomat provides enough power to repetitively move patients’ legs with high muscle tonus in a gait-like trajectory, while at the same time ensuring safe training conditions as safety mechanisms will stop the movement before forces acting on the legs can injure the patient.

The challenge in this case is to establish a consistent gait pattern without having the Lokomat stop in response to the spastic tension.

The first patient was an ambulatory patient presenting reduced ROM and moderate levels of spasticity. Therefore, at the beginning, the ROM was kept rather small in accordance with his compensatory walk pattern to enable comfortable walking. The ROM was slowly increased during training progression in order to establish a normal gait pattern. The patient quickly became accustomed to the device and was able to walk with full weight bearing at approximately 1.9 km/h.

The first training session lasted only 20 minutes even though the patient was very motivated and would have liked to walk longer.

The effort of walking is however often underestimated and muscle soreness might appear later on. That is why it is recommended to keep walking duration rather short during the first training session. 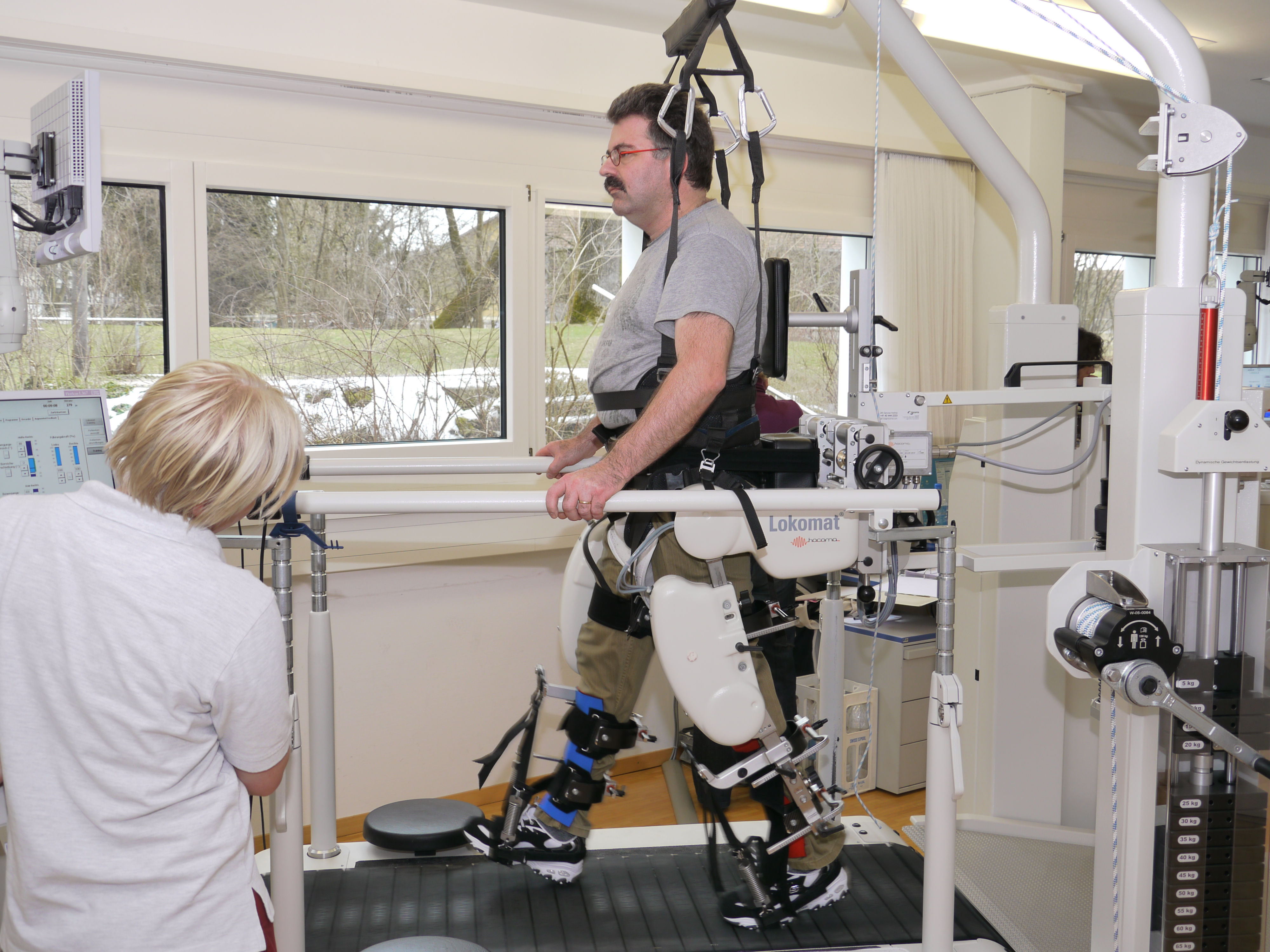 As the training progressed, the ROM was slowly increased until a physiological gait pattern could be achieved.

Within the next 3 sessions the walking speed was increased to 2.2 km/h, the ROM was further increased and the training duration was extended to 45 minutes.

The second patient suffered from very high levels of spasticity, strong adduction, reduced knee flexion ability and strong ankle joint supination. The first training was therefore rather difficult as the high level of muscle tonus repeatedly triggered the safety mechanisms and stopped the Lokomat. In order to overcome this difficulty, training was started at very slow speeds (1.3 – 1.5 km/h) with a very limited range of motion, especially in the knee joints, and with 100 % BWS to further reduce afferent input. Nevertheless, the Lokomat had to be restarted a number of times due to safety stops. The first training session was stopped after approximately 25 minutes and at that point improvements in muscle tonus were already apparent. During the second training the patient was already able to bear some weight and walk at an increased speed. The ROM was still kept rather small with little flexion of the knee joints, since the main focus was to achieve a normal walking pattern of both feet on the treadmill with the help of both foot lifters. Quite a demanding task for the patient.

During the next trainings, the ROM in the knee joints as well as other parameters were continuously adjusted, until this patient was also able to walk with a normal gait pattern and full weight bearing for up to 40 minutes.

Both patients remained at the Rehaklinik Zihlschlacht for a week and received 3 to 4 training sessions, therefore only limited effects were expected. Both patients received conventional therapy in addition to Lokomat assisted therapy with the aim to further support mobility. The therapy program included muscle stretching, general mobilization and strength training.

The main improvement reported after a week by both patients as well as therapists was a general decrease in muscle tonus, in particular during and after Lokomat assisted training. This was especially obvious in the more severely affected patient as training could take place without any interruption for the whole training session.

Both patients also reported alleviation in response to decreased muscle tonus, which helped them carry out activities of daily life, for example transfer in and out of the wheelchair.

In terms of gait pattern, the therapists observed minor benefits only for the ambulatory patient. Both patients however reported that repetitive walking in a physiological rather than the established compensatory gait pattern was perceived as very pleasant.

This physiological gait pattern was still mentally present and seemed to help during over ground walking, at least for some time after Lokomat training.

Patients as well as therapists were therefore encouraged to test Lokomat assisted training in the future for a longer time period in order to see whether this could lead to further improvements that will sustain over time.

In terms of gait pattern, the therapists observed minor benefits only for the ambulatory patient. Both patients however reported that repetitive walking in a physiological rather than the established compensatory gait pattern was perceived as very pleasant.

This physiological gait pattern was still mentally present and seemed to help during over ground walking, at least for some time after Lokomat training.

Patients as well as therapists were therefore encouraged to test Lokomat assisted training in the future for a longer time period in order to see whether this could lead to further improvements that will sustain over time.