< Go back to Clinical Integration Reports 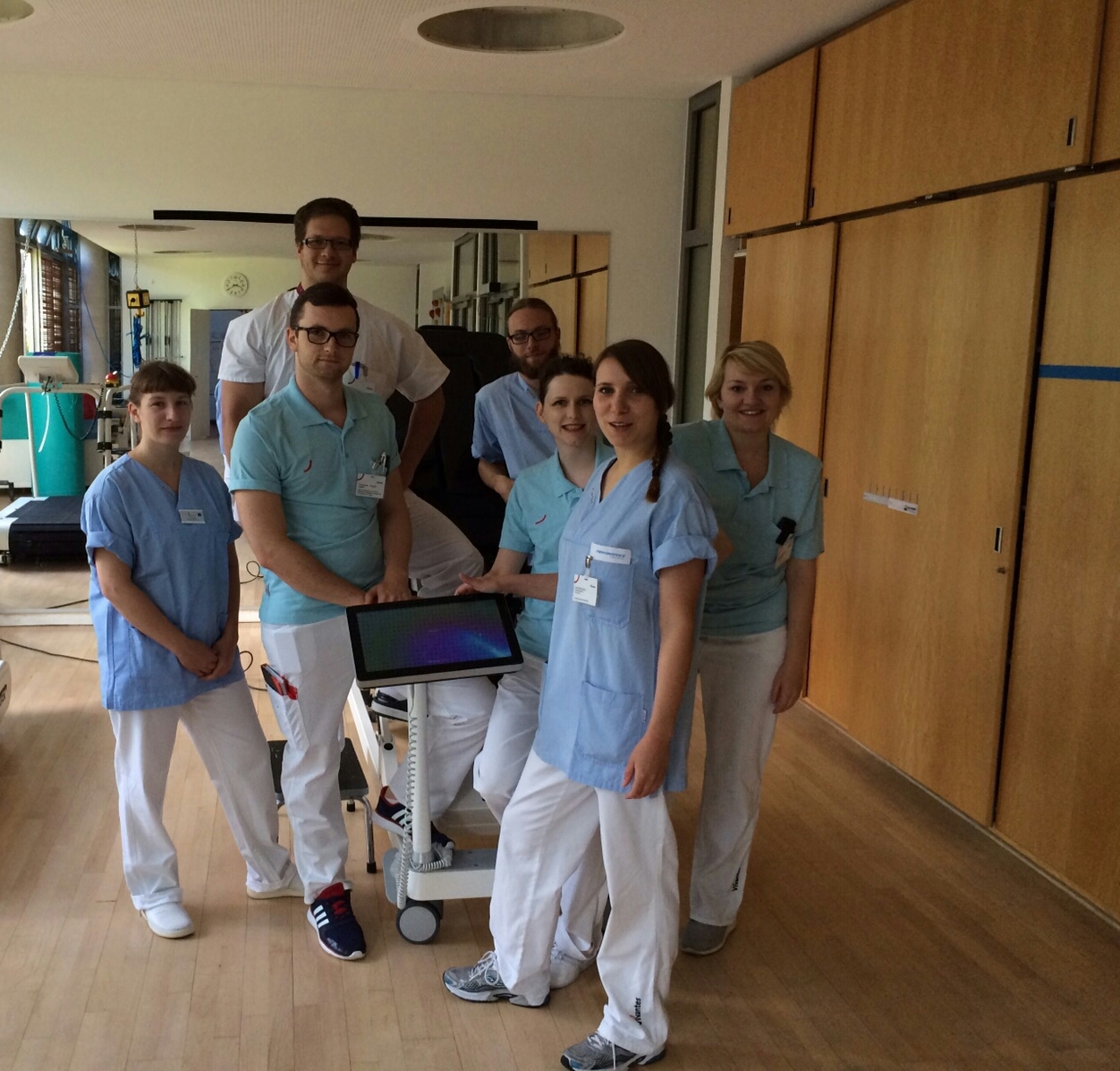 The Erigo therapy team at the Vivantes Hospital in Spandau, Berlin.

We are working with the Erigo since January 2014 to complement the treatment of diverse neurological pathologies in different units of our hospital. We want to share our integration of the Erigo and hope that other institutions can gather some ideas that might support a successful embedment of the Erigo into their daily routine.

Due to the variety of treated pathologies, such as Stroke, TBI, Parkinson’s disease, MS and SCI, the Erigo enables effective mobilization in our acute unit, stroke unit, in our units for neurologic rehabilitation, and in our unit for severe TBI patients.

We include patients with the above mentioned pathologies. The final decision, however, on whether to start with  the Erigo therapy is dependent on several factors. First of all, patients have to be stable enough to be mobilized by therapists. We take cardiovascular parameters, osteoporosis, severe contractures (passive ROM), spasticity (Ashworth Scale) compliance and other appearances like internal bleedings that could avoid mobilization into consideration. Secondly, the patient’s height has to be within the Erigo’s height limits.

In case of severe spasticity in lower extremities, patients can often still be trained on the Erigo after successful Botulinum toxin treatment.

Duration and Frequency of Erigo® Sessions

At the moment our Erigo is running about 16 to 24 hours per week and patients are trained 3 to 4 times per week on the Erigo. A complete therapy session including transfers and setup takes between 45 minutes and one hour.

The duration of the treatment period with the Erigo highly depends on the patient’s functional progress, but is at least one month.

We use the Erigo as a preparation for longer phases of standing upright and it is used preceding to other devices such as Eksos or gait trainers.

At the Vivantes Klinikum Spandau Physiotherapists and Occupational Therapists work with the Erigo.

For the coordination of the Erigo sessions we’ve introduced a timetable, where the therapists can book hourly time slots for their patients.

The execution of additional therapy (co-therapy) during an Erigo session is very individual and depends on the therapists. Possibilities for co-therapies are mobilization and task specific training of the upper extremities and coordination training. Our therapeutic approach is multi-professional and depends on the International Classification of Functioning, Disability and Health (ICF) goal setting. 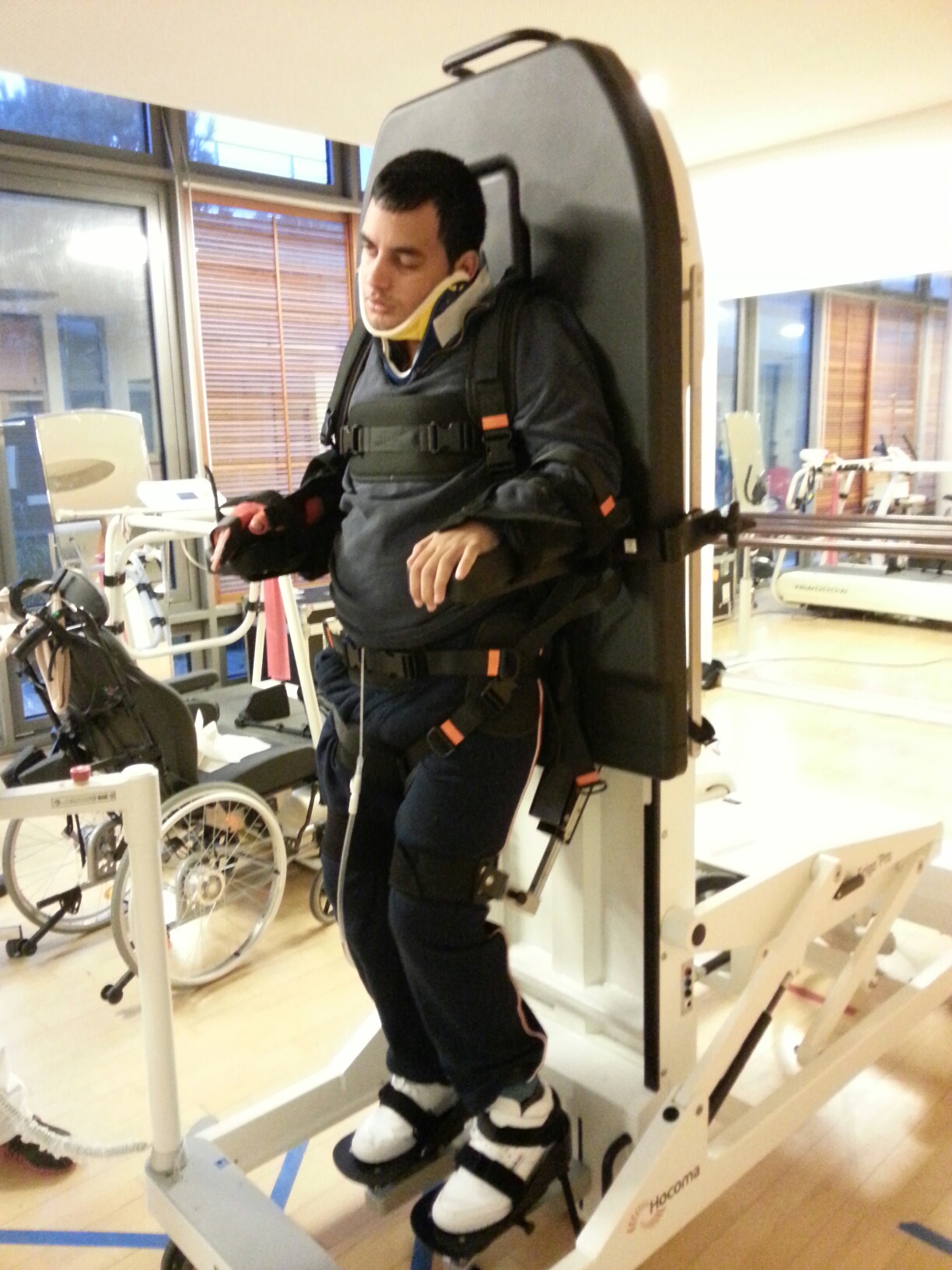 Reasons to Include the Erigo® as Part of the Therapy Program

The following advantages and our experience with the Erigo proof that it can be successfully integrated into the hospital’s daily routine and into the therapeutic progress of our patients:

Based on the ICF the use of the Erigo in our clinic achieved the following:

The Erigo is an excellent hands-off therapy since a reduction of robotic support of the less affected leg forces the patient to actively contribute to the movement which ultimately augments activation of the more affected leg. Therefore, the patient is adequately challenged and works close to his individual performance limit. This is one reason why Erigo therapy is very well accepted by our patients.

Other Therapies Provided in Addition to Robotic Rehabilitation

There is no special refunding for our robotic treatment in general. Robotics, especially Erigo, is a part of the rehabilitation process at our hospital, which is covered by the health insurance.

In other occasions our medical director visits private patients who pay the therapy on their own. Private patients pay a doctor’s fee and for the treatment time they receive. The charge is the same for Erigo treatment as for other types of therapy.

The Vivantes Hospital Spandau and the Humboldt Hospital in Berlin each include an acute neurorehabilitation unit (phase B). Robot-assisted therapy integrated into an interdisciplinary team is one of the main foci of these units. Therefore, we purchased several different robot-assisted therapy devices as the Erigo, the Eksobionics, the gait trainer GT1, units from Tyromotion, Reha-digit as well as solely mechanical devices like the Reha-slide and the Duo-slide. This palette of devices enable us to provide an efficient, high quality and holistic approach of neurologic rehabilitation.

This clinical experience report is meant to serve as an example of how the Erigo is integrated into the clinical setting in one individual hospital. It is not necessarily a standard recommendation from Hocoma.