What are the Indications and Contraindications for Erigo Therapy?

What are the Indications and Contraindications for Lokomat Therapy?

What are the Indications and Contraindications for ArmeoSenso Therapy?

What are the Indications and Contraindications for ValedoMotion Therapy?

What are the Indications and Contraindications for ArmeoPower Therapy?

What are the Indications and Contraindications for ArmeoSpring Therapy?

What Must be Considered During the Armeo Therapy Session of Patients with Shoulder Subluxation*?

Do some of the patients you treat suffer from shoulder pain and subluxation*? Are you interested in some clinical tips on how to train these patients with the Armeo? Read this Q&A to find out more!

Armeo therapy in patients with shoulder subluxation is possible and successfully applied in a number of clinics. However, special care from therapist’s side is required in order to ensure a safe therapy session. A few important  points should be considered before and during training: 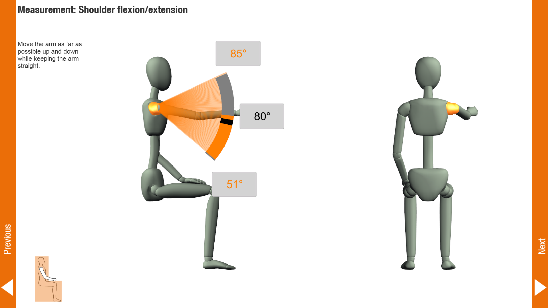 *Subluxation grades 1-2 according to Langenberghe and Hogan1

Is it Possible to Train Patients with Cognitive Deficits?

Severe cognitive deficits are listed as contraindications for Armeo training. However, depending on the severity of the deficit, training may be possible if the following criteria are met:

Below we have outlined a number of risks associated with limited cognitive abilities, and possible adjustments in order to ensure safe and effective therapy session with the ArmeoSpring.

Please note that it is the clinicians’ responsibility to evaluate the possible risks and benefits for patients with impaired cognition and decide whether Armeo therapy is suitable.

Is it Possible to Train Children on the Erigo?

The patient size for Erigo training is defined by:

How Frequently Should I Train Patients on the Erigo?

The simple answer is: the more often the better.

Especially in the early stage of rehabilitation, training the cardiovascular system and increasing the patient’s tolerance to the upright position are very important therapy goals. A minimum of 5 times a week is desirable to activate severely impaired patients. You can even train them twice a day on the Erigo (for example in the morning and in the afternoon).

Is the Lokomat Suitable for Patients with Spasticity?

With patients with high spasticity, please pay special attention to the following points. If any of these three points is the case, then Lokomat therapy is not suitable for the patient.

Tips for Regulating the Spastic Response

These recommendations are based on the feedback of experienced Lokomat users.

Is it Possible to Treat Patients with Osteoporosis on the Lokomat?

In many cases, patients with a neurological disorder spend a considerable amount of time sitting in a wheelchair or lying in bed, especially if they are unable to participate in an exercise or standing program. They have limited ability to complete activities involving axial weight bearing and the use of functioning muscle to preserve bone mass, and are thus at risk for osteopenia and osteoporosis. This forces clinicians to carefully consider the type and intensity of rehabilitation a patient can safely handle.
This document discusses specific aspects you may want to consider prior to deciding whether your patient is suitable for Lokomat training if they have a diagnosis of osteoporosis.

Osteoporosis, on one hand, is a risk factor for Lokomat training. The repetitive axial loading and sheer forces exerted on the skeletal system during training can, despite the safety mechanisms, lead to fractures or other injuries in osteoporotic bones if not enough caution is taken.
On the other hand however, gait training with repetitive loading is an effective way of increasing bone density and reducing the negative effects of immobilization. From that point of view, Lokomat training could be very beneficial for individuals with osteoporosis. Therefore, the clinician has to decide whether the potential benefits outweigh the potential risks in each individual case.

Most patients with a neurological condition display some level of osteoporosis or osteopenia. Osteoporosis is always a risk factor (i.e. training with the Lokomat is still possible under certain circumstances) and osteoporosis in its advanced stages is a contraindication and patients in this case must not train with the Lokomat. However, no clear cut-off value exists to differentiate between when osteoporosis is to be considered a risk factor and when it is to be considered a contraindication. This is a judgment call that must be made by the medical experts overseeing the patient’s treatment.

When carrying out Lokomat training with patients who are at risk for fracture, pay particular attention and consideration to the following factors.

Keep in mind that the treating medical experts who prescribe and carry out Lokomat therapy are responsible for the patient. It is their decision as to what kind of treatment is appropriate for individual patients in their care; this includes whether Lokomat training is appropriate for a given patient.

Hocoma can only present items to consider when making the decision; Hocoma cannot make the decision as to whether Lokomat training is appropriate, especially without having any contact with the patients.

Can I Treat Amputee Patients on the Lokomat?

Yes. Amputee patients are a target group for the Lokomat since their gait ability can be impaired. Though two Lokomat contraindications (“orthosis cannot be adjusted to fit the body (lower limbs)” and “patients with extremely disproportionate growth of the legs”) are given, in general Lokomat training for amputee patients can be explored. They are not explicitly listed as a contraindication nor indication in the User Manual due to the large variety of amputations and orthopedics used.
Gait training with Augmented Performance Feedback has been shown to benefit amputee patients (Darter and Wilken 2011). We are aware that some centers train amputee patients using the Lokomat and have observed benefits and improvements. We therefore recommend that you evaluate the possible benefits and risks for your patient in order to decide the suitability of Lokomat therapy for your patient.

The Lokomat is a very effective tool for treating walking disabilities, and as such amputee patients can benefit from it. Clinics using the Lokomat with this patient population find it very helpful in the following respects:

Possible Risks and Aspects to Consider

Though the Lokomat can be a suitable tool for gait training for amputee patients, we outline below a few questions and considerations that must be taken into account before training begins:

Keep in mind: as clinician, you are responsible for your patient. It is your decision what kind of treatment is appropriate for individual patients under your own responsibility. Additionally, please note that we recommend that only skilled and experienced users consider using the Lokomat with amputee patients. Please consult our terms of use.

After surgical intervention, a rehabilitation period is needed to achieve the functional goals. Lokomat therapy can be a rehabilitation tool for intensive gait therapy after surgery, but the parameters needed for successful therapy are not well understood.

In this entry, we summarize the practical recommendations for Lokomat therapy after surgery as published by a group of physical therapists and physicians experts in the management of patients with cerebral palsy.

It is extremely important to define clear therapy goals after surgery. Lokomat therapy should only be carried out in accordance with the therapy goals of the patient. According to the recommendations from the experts, Lokomat therapy is not indicated after strong structural changes. Moreover, this group also recommends seeking out alternative therapies for patients whose goal is not to recover or rehabilitate gait after the surgery (Aurich et al. 2015).

Pain is a common problem after orthopedic surgery (Hoiness et al. 2014). Pain should be avoided during Lokomat therapy (Aurich et al. 2015). There are various factors that may lead to pain during a Lokomat session, and each cause should be considered individually. For example, pay special attention while fitting the harness (use additional padding if required), avoid friction between cuff and leg with proper tightening of the cuff, and adjust the range of motion according to the patient’s limits. These are a few examples of general recommendations on how to control or reduce the incidence of pain during a Lokomat session.

After surgery performed on a bone (pelvis, femur, foot, etc.) there is a general recommendation to wait 8-12 weeks before starting Lokomat therapy. Consolidation of the surgery needs to be sufficient and judged by the orthopedic surgeon as well as documented by x-ray. Free passive ROM (especially in hip and knee flexion) should be documented prior to the start of therapy. The amount of loading should be discussed with the orthopedic surgeon prior to the start of therapy. When the patient has been prescribed and/or fitted with an ankle-foot orthosis after surgery, it is recommended that the patient wear it during Lokomat therapy (Aurich et al. 2015).

Lokomat therapy is contraindicated after hip, knee and ankle arthrodesis.

Musculoskeletal deformities are a common secondary problem in children with cerebral palsy. General considerations apply for mild to moderate deformities. Strong structural abnormalities in the frontal or sagittal plane (e.g. genu varus, genu valgus) are contraindications for Lokomat therapy since the risk for secondary injuries due to possible shear forces is increased.

Hip subluxation and dislocation is not a general contraindication. Training in an abducted hip position (by adjusting the frontal plane settings of the Lokomat) is recommended for such patients (Aurich et al. 2015).

Asymmetrical leg length influences the position of the pelvis and/or the foot contact with the treadmill. Relevant leg length discrepancy should be corrected (e.g. using insole or shoe rise) in order to improve the pelvis position and the ground contact (Aurich et al. 2015).

Scoliosis is not a general contraindication. The position of the patient during therapy should be considered and an upright position of the trunk (Aurich et al. 2015) shall be the goal. As an indication, experts point out that patients with a Cobb angle over 60-70° have a difficult time staying upright. Moreover, a trunk stabilizing orthosis needs to be used with caution to prevent pressure marks or disturbed blood flow in the upper limbs (Aurich et al. 2015).

Lokomat therapy with patients after lumbosacral fixation / fusion must be discussed and agreed upon with the orthopedic surgeon (Aurich et al. 2015).

For children with cerebral palsy and a GMFCS level IV-V (non-ambulatory), consider the bone density and the risk that osteoporosis presents. Significant osteoporosis is a contraindication for Lokomat therapy (Aurich et al. 2015).

Keep in mind that the treating medical experts who prescribe and carry out Lokomat therapy are responsible for the patient. It is their decision as to what kind of treatment is appropriate for individual patients in their care; this includes whether Lokomat training is appropriate for a given patient.

Hocoma can only present items to consider when making the decision; Hocoma cannot make the decision as to whether Lokomat training is appropriate, especially without having any contact with the patients.

The pediatric population has special individual characteristics which make a simple generalization from adults to pediatrics impossible. For that reason, a group of physical therapists and physicians met together and developed some practical recommendations for Lokomat therapy in children with Cerebral Palsy. The complete results are published in the 2015 article titled Neuropediatrics by Aurich et al.

In order to ensure proper setup, the following recommendations were made by a group of experts: (Aurich et al. 2015)

Keep in mind that the treating medical experts who prescribe and carry out Lokomat therapy are responsible for the patient. It is their decision as to what kind of treatment is appropriate for individual patients in their care; this includes whether Lokomat training is appropriate for a given patient. Hocoma can only present items to consider when making the decision; Hocoma cannot make the decision as to whether Lokomat training is appropriate, especially without having any contact with the patients.